Hi all – this is a little webpage about my upcoming visit to Imperial in Feb 2018. If you  have any questions in advance feel free to message me!

Why am I visiting?

While I’m at Imperial, I’ll be giving a talk on my research in lithosphere deformation – it will have a title something like Deformation driven by deep and distant structures: influence of mantle lithosphere scarring in crustal tectonics. I’ll be presenting numerical modelling results using a numerical code called ASPECT.  The code is a relatively new venture with quite big ideas about itself – which is the other reason why I am visiting. I’m keen to chat to the group to see if ASPECT could be used to supplement any existing studies/research programs. A main point of ASPECT is to be usable and extendible – I think it could be a great tool for the group at Imperial. 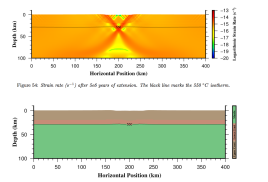 Strain rate(s−1) after 10e6 years of extension of cookbook example. The black line marks the 550 ◦C isotherm. The numerical resolution is (1 km)

Panels (a) and (b) show the density distribution as prescribed from the shear wave velocity model S20RTS and the resulting flow for a global refinement of 4. This model assumes a constant scaling between shear wave and density perturbations. Panel (c) shows the great circle (dashed blue line) along which the top slices are evaluated. Panels (c) and (d) show the resulting heat flux density for a global refinement of 2 (c, cookbook) and 4 (d). The colorbar ranges from 13 to 19 mW/m2 for panel (c) and from 35 to 95 mW/m2 for panel (d). 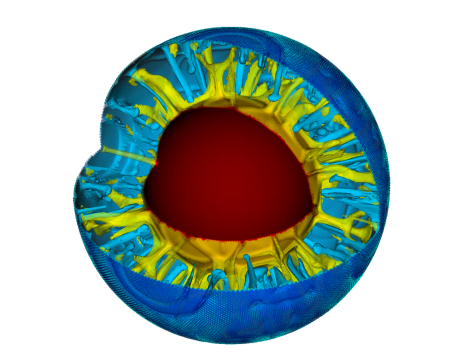 Convection in a spherical shell: Snapshot of isosurfaces of the temperature field at time t ≈ 1.06 · 109 years with a quarter of the geometry cut away. The surface shows vectors indicating the flow velocity and direction.

Cross sections of the present-day state showing the sublithospheric flow channel from the Réunion plume along the Rodrigues Ridge toward the Central Indian Ridge (CIR) in (a) model PlumePosVar9 and (b) model NoGlobalFlow, slightly shifted to the south to cut through the plume conduit. Colors show the excess temperature relative to the adiabat and the area exceeding 5% melt fraction, respectively. The dark red contour outlines the plume and the white contour the base of the lithosphere. Orange arrows depict the global flow, green arrows the plate motions. The inset map shows the position of the cross section in a top view of the model. 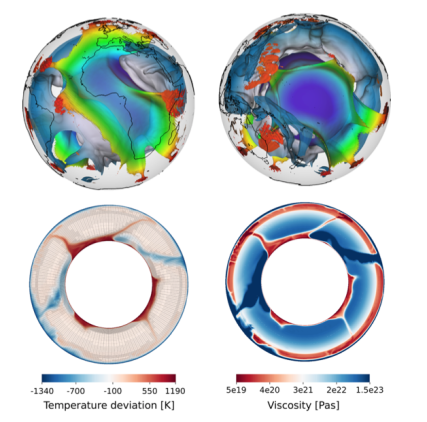 Global mantle convection models with paleo subduction history. Final state of a global mantle convection simulation after 250 Ma of model time. Top panels: Isosurfaces of −150 K (white to blue) and +300 K (rainbow coloured) temperature deviation from an adiabatic temperature profile for the African hemisphere (left) and the Pacific hemisphere (right). Colours visualize height above the core–mantle boundary, and coastlines are shown in black outlines. Bottom panels: Equatorial slices through the model showing temperature deviation and finite-element mesh (centre left) and viscosity (centre right).In all slices the Greenwich meridian is ‘up’ and the view is directed from the North pole to the South pole.

Subduction model. Strain rate field over time together with subjecting plate and oceanic plate isocontours. Also shown is the adaptive mesh following the subducting plate into the mantle.

A bit about the code

ASPECT stands for: Advanced Solver for Problems in Earth’s ConvecTion

It is written in a purposely extendible fashion, meaning it can be easily built on by different groups around the world – each adding something new and exciting to the code (which is written in C++).

It was built to support research in simulating convection in the Earth’s mantle and elsewhere. However, the latter part of the sentence is slightly misleading – as it sounds like it is only a code for mantle convection. ASPECT can also be used to simulate of lithosphere deformation (which is what I use it for).

The code generally runs on a supercomputer, but smaller simulations can be run on a desktop or even a laptop.

The code is free and developed out in the open (here, to be exact, so you can see what people are working on and what bugs there are). A big feature of ASPECT is that it is science-driven in it’s development – meaning that if lots of people are interested in developing rifting models or salt tectonic simulations, the code will be steered to incorporate all the nuanced parameters required. From the website:

It has grown from a pure mantle-convection code into a tool for many geodynamic applications including applications for inner core convection, lithospheric scale deformation, two-phase flow, and numerical methods development….

And it is still developing, it is not finished, and has a long way to go!

Another plus is that there is a pretty good mailing list. This sounds boring but it is really good – it is a venue for users to share problems and issues in the hope that other members of the community have either seen them and solved them, or can give advice on how to fix it.

You a fan of 2D? Or 3D better? ASPECT is built to extend a model dimensionally without too much difficultly.

What do you want to model – pick a geometry that is already built into the code: Box, box with lithosphere boundary conditions, chunk, ellipsoidal chunk, sphere, spherical shell, or unspecified!

The beauty of the code is that you can throw a lot at it. One example is apply seismic input to generate flow fields, to generate topography:

Basic setups as a starting point

At present, there are 30+ ‘cookbook’ examples that are available to use once the code is installed. Examples of interest include:

The input files for these codes are easy to understand, and easy to change. I will go through the input file for the continental extension cookbook when I am visiting, as I think it will be a good starting point.

As described in the file – the cookbook is based off numerous published studies, including

All these parameters can be modified easily by the user. Below are example of this input file that is ‘out of the box’ ready to use:

A low resolution video of the model can be seen below.

What is important: This starting input file can be quickly extended to 3D, increased in depth, and have the rheology changed.

Examples of published studies with ASPECT

It can be a bit of a pain to install, but with people on hand it can be simple. I’m available to help with installation and to create an installation guide – like the ones I’ve previously created. Another downside is that the code can take a little while to complete simulations.

A bit more about the code (links)

Join the mailing list here! – it is an excellent way to get involved with the development and to voice questions.

ASPECT is a code to simulate problems in thermal convection. Its primary focus is on the simulation of processes in the earth’s mantle, but its design is more general than that. The primary aims developing ASPECT are: